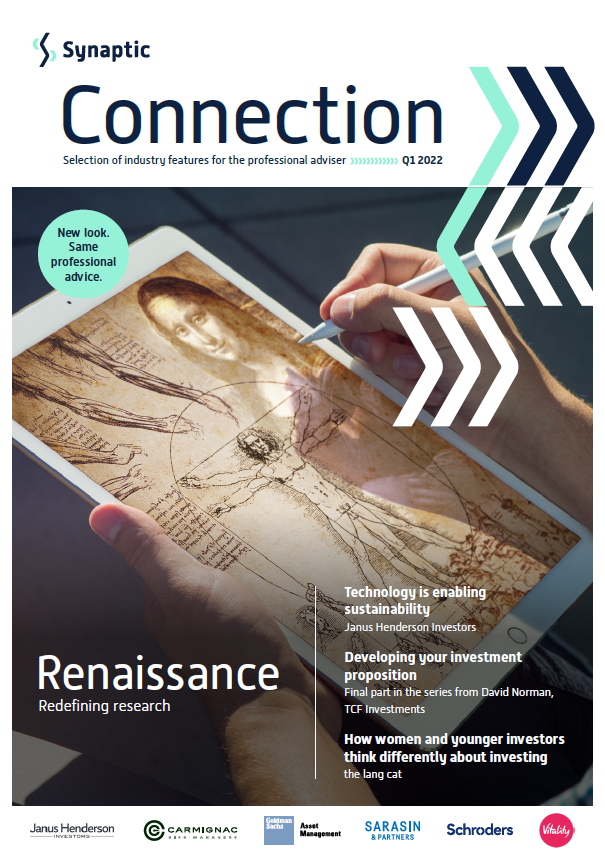 New beginnings & a renaissance for Synaptic

How women and younger investors think differently about investing

Every now and again, it's worth talking to consumers about what it is we as a financial services sector are doing for them, and whether any of that activity is having a positive impact.

Of course, advisers and planners will be talking to clients all the time. But for us 'industry' types it’s worth finding out what people outside of the bubble think of us, and whether we can do better in both engaging people in conversations about their money, and protecting them from harm.

From the findings of one of our latest research projects, it would appear we are failing on each of these fronts for two distinct groups – women and younger investors.

I’ll explain what I mean in a bit, but first I’ll share more about the research itself and the reasons behind it.

"At our recent #langcatlive conference, we were preoccupied with one central question: Who benefits? For all the progress the advice profession has made, amid the changes brought in by the RDR, pension freedoms and more, are we better or worse off than before? Are consumer outcomes where we want them to be, and if not, why not?"

To tease out what’s really happening on the ground, and to understand more about how consumers feel about advice, investing and financial services in general, we commissioned some research. The research, kindly supported by Schroders, was carried out in January by YouGov with 1,900 respondents. They were asked about a number of themes geared around perception, trust and knowledge of financial services.

We also asked about whether people thought they should know about things like investment products, the flow of money in financial firms and who profits, and how to interpret investment performance.

But it was when we flipped the question and split the data by gender that big disparities started to show up. Women were almost twice as likely as men not to want to know about this stuff. For example, 28% of women surveyed didn’t want to know about interpreting investment performance compared with 15% of male respondents. And 18% of women questioned couldn’t care less about investment products versus 9% of men.

It’s been pointed out to me that the gender splits in our data have some interesting implications, not just for engaging female investors, but also for how to approach planning conversations with couples.

The gender gap – Exhibit A

It’s widely acknowledged there is a gender gap when it comes to pay, wealth and investing. BNY Mellon Investment Management recently carried out its own research into making investing more inclusive (albeit on a much grander scale than ours).

Their research surveyed 8,000 respondents globally across 16 markets, alongside interviews with 100 asset managers from fund groups responsible for a combined $60 trillion in assets under management.

A couple of the findings stood out for me. The first one was that almost nine in 10 asset managers interviewed admit that their default target client is a man.

The second is that for half the asset managers questioned, just 10% or less of their fund managers or investment analysts are women.

So when taken with our research, it suggests that:

Anyway, back to our own research. The other group I mentioned at the start were younger investors, some of whom may be more susceptible to the unregulated financial influencers popping up on TikTok, Instagram and elsewhere.

The FCA is alive to this issue, and while people can say what they like on social media (for better or more often worse) what the regulator can do is go after the financial companies these influencers are associated with.

The Financial Times reported in February that the FCA had ordered investment app Freetrade to delete social media promotions after uncovering issues with posts by a personal finance influencer sponsored by the company.

In one video the influencer, who has over 64,000 TikTok followers, failed to include a ‘capital at risk’ warning. In another post, the FCA judged that the influencer’s story of reducing her debt could mislead people into thinking that investing with Freetrade could help with their own debt problems.

Our research found that when it comes to ‘new generation investments’ like cryptocurrency and free trading, the messaging is pretty prolific. Some 44% of respondents remembered seeing an advert for crypto in the past few weeks, and 31% had recently seen an advert for a trading platform (here we’re talking about firms that promote high-risk investments like forex and contract for difference products rather than established D2C platforms).

The data suggests it is men who are being targeted with these kinds of high-risk investing ads – 51% of those surveyed who had seen a crypto ad in recent weeks were men, versus 35% of women.

Breaking it down by age, the over 55s were much more likely to disagree with the statement that ‘new generation investments are exciting’. This is also the age bracket most likely to have an adviser. At the other end of the scale, some 39% of 18 to 24 year olds questioned felt that these kind of investments were exciting, falling to 28% of those aged between 25 and 34, and 23% of respondents aged 35-44.

This is just a snapshot of the wealth of data we collected. But it’s worth thinking about what we can do, individually and as a sector, to communicate some of these issues better. It seems at the moment we are not talking on a wide enough scale to women about money on a level they can engage with, and that younger investors are increasingly getting their information from largely unqualified, unregulated sources. The fact remains it is often easier and more attractive for people to take out a high-risk investment than a safe one. Which doesn’t sound like better consumer outcomes to me.

For more insight from the lang cat, visit