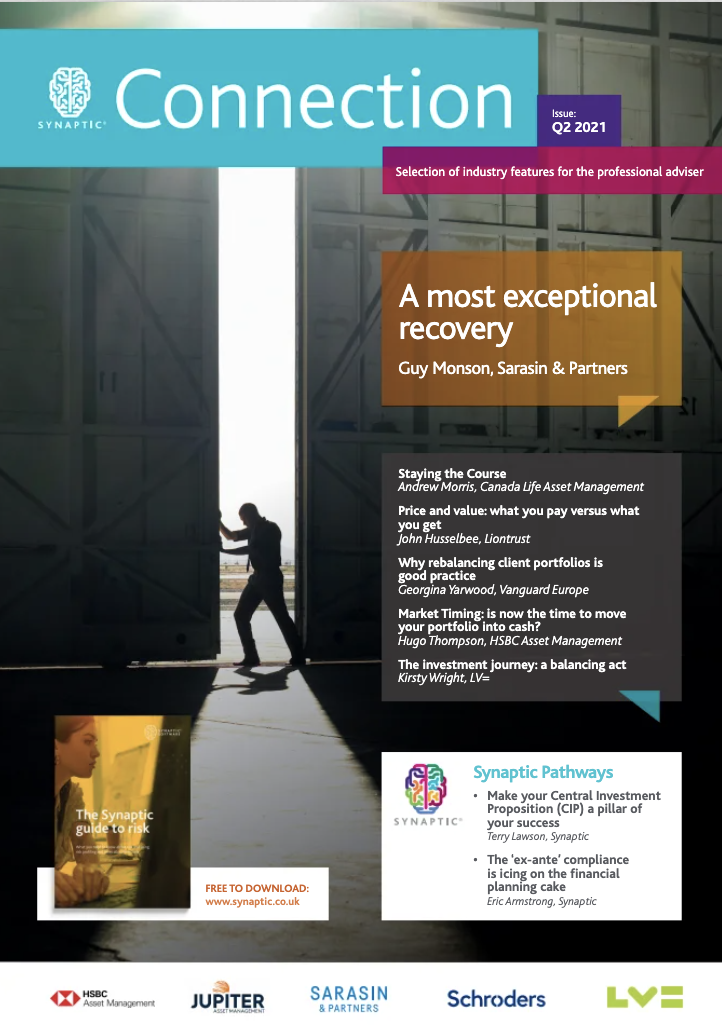 A most exceptional recovery

Emerging from the winter of discontent

Over a year since 'the great lockdowns' began across regions, the global economic recovery continues, though signs of increased divergences are strengthening.

"The conflict between pressure to keep rates low and a growing need to confront increasing inflation expectations on the back of unprecedented fiscal stimulus poses a serious challenge for the Fed and other central banks, which will define the post-pandemic landscape."

The economic damage has been less severe than expected following the winter surge in virus cases in many regions given generally lower stringency measures, better adaptation among populations and continued policy support.

Effective vaccine roll-outs will be critical in the next phase of the pandemic, but the Covid-19 story is far from over yet, as variants start to become increasingly problematic.

The role of central banks and monetary policy remains important, but fiscal policy has taken centre-stage, and will dominate the macroeconomic and market outlook over the coming years.

We have seen an unprecedented flood of governmental relief payments during the lockdowns, amounting to $5.6trn or 26% of US 2019 GDP. Including the $3trn of infrastructure, green investment and social spending that President Biden has proposed in the Build America Back plans, total discretionary fiscal spending in the US over a several-year period could amount to a staggering $8.6trn, or 40% of 2019 GDP.

The logical outcome, and we believe the most lasting legacy of the Covid crisis, is the burgeoning public debt issued to fund this fiscal spending worldwide. This much higher debt burden, not seen in the US and other developed markets since WWII, will require major central banks (including the US Federal Reserve) to implicitly target negative real interest rates for the foreseeable future in order to maintain debt sustainability.

The conflict between pressure to keep rates low and a growing need to confront increasing inflation expectations on the back of unprecedented fiscal stimulus poses a serious challenge for the Fed and other central banks, which will define the post-pandemic landscape.

The unique nature of the Covid recession has meant the recovery has been speedy, already moving through the mid phases of the business cycle in some cases.

Through 2020 H2, we saw the hallmarks of an early cycle recovery with asset classes pricing it in accordingly: equities and credit rallying, yield curves steepening, and cyclicals and commodities performing strongly. Markets have been leaning into early-cycle reflation trades which have already rallied significantly leading to mid to late cycle type concerns arising. Also, with volatility picking up, there are signs we are passing through mid-cycle in terms of pricing. However, based on our analysis, we still believe the reflation trade has more to go.

Coming into Q2, we remain positive on equities given strong earnings and the prospects for strengthening global growth, and more negative on duration and cash. Within fixed income, high yield assets look more attractive than investment grade counterparts due to falling high yield default projections and tightening credit spreads. Meanwhile, we prefer equity regions more geared to the cyclical upswing such as Japan and emerging markets. UK equities will also be a beneficiary given their highly cyclical sector composition and the better than anticipated vaccine roll-out.

Given the high and rising debt burdens, the global economic system is highly exposed to a steep rise in interest rates. Keeping real rates in negative territory, in our view, has become a monetary policy goal.

With economic re-opening drawing nearer and massive fiscal easing in the US putting upward pressure on cyclical inflation, having a strong anchor on the relationship between breakevens and real rates (based on lessons from 2013 and 2018) will be critical in shaping our views on risk assets.

From a strategic asset allocation standpoint, we believe it is imperative to re-think the current core asset mix and in many cases accept that a traditional 60/40 approach may no longer meet the needs of investors over the coming years, especially when looking at European and Japanese government bonds.

As investors, we must therefore also be open to designing portfolios using a different framework and developing new toolkits to build robust portfolios against this evolving backdrop. When it comes to designing strategic asset allocation, we must acknowledge the profound changes in the evolving macroeconomic landscape and move towards a more flexible approach to mapping the investment implications of the 'new abnormal'.

Since it was founded in 1969, institutions, individuals and advisers have increasingly looked to Fidelity International for world class investment solutions that help to build better futures for themselves and generations to come. Today, we are trusted to manage client assets of £416.7 billion on behalf of 2.5 million investors in the UK, Continental Europe, the Middle East, Asia Pacific and South America.

We look to partner with clients for the long-term, reflecting the same focus and stability that belies our private ownership – we’re mainly owned by management and members of the original founding family. Present in over 40 countries, we seek to understand local needs, listening and consulting clients to deliver the optimal solution.

This information is for investment professionals only and should not be relied upon by private investors. Past performance is not a reliable indicator of future returns. Investors should note that the views expressed may no longer be current and may have already been acted upon.

Changes in currency exchange rates may affect the value of investments in overseas markets. Investments in small and emerging markets can be more volatile than other more developed markets.

The value of bonds is influenced by movements in interest rates and bond yields. If interest rates and so bond yields rise, bond prices tend to fall, and vice versa. The price of bonds with a longer lifetime until maturity is generally more sensitive to interest rate movements than those with a shorter lifetime to maturity. The risk of default is based on the issuer's ability to make interest payments and to repay the loan at maturity. Default risk may therefore vary between different government issuers as well as between different corporate issuers. Reference to specific securities should not be construed as a recommendation to buy or sell these securities and is included for the purposes of illustration only. UKM0521/34350/SSO/NA